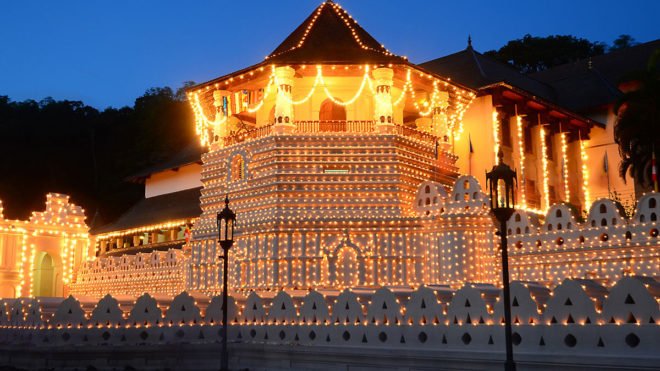 Negombo is a major city in Sri Lanka, situated on the west coast and at the mouth of the Negombo Lagoon, in Western Province, Sri Lanka. Negombo is the fourth largest city in Sri Lanka and it is the largest city in Gampaha District. Negombo is also the administrative capital centre of the Negombo Division. It is one of the major commercial hubs in Sri Lanka with about 144,551 inhabitants within city limits. It is approximately 35 km north of Colombo City. Negombo is known for its huge and old fishing industry, with busy fish markets and long, sandy beaches. Negombo is the most westernized, vibrant city and it is one of the major tourist destinations in the country. The main international airport of Sri Lanka is in Negombo Metropolis.

Kandy lovely exotic city, the Hill Capital and last stronghold of the Sinhala Kings is a UNESCO World Heritage Site which retains an aura of grandeur, time has not affected. Encircled by hills, with a tranquil lake in its centre, it is the site of the renowned temple that enshrines the Tooth Relic of the Buddha and the Royal Botanical gardens – home to one of the world’s best collections of Orchids. A cultural sanctuary where many legends, traditions and folklore are still lovingly kept alive, Kandy and its satellite villages are the centre of the islands handicraft industry (items of wood, brass & silver) exquisite silver or gold jewellery and precious gems of many varieties including the world’s best blue and star sapphires. The highlight of the city’s calendar is the Esala Perahera, when a replica of the casket enclosing the Tooth is taken in procession for ten glittering nights in July/August by exotically costumed dancers, drummers and approximately 100 Elephants.

Pinnawela Elephant Orphanage – set amongst the verdant hills of Kegalle is a unique orphanage, where the tiny tots weigh 60 kg or more. This is the Pinnewela Elephant Orphanage, the world’s first and only elephant orphanage established to feed, nurse and house young elephants lost or abandoned by their mothers. Other occupants are elephants displaced from their natural environs by development projects or those found wounded. Visitors could see the baby elephants being fed milk from gigantic feeding bottles or bathed in the river which flows nearby – an unforgettable sight! Established in 1975, by the Wildlife Department and National Zoological gardens which subsequently led to a breeding programme through which more than twenty five elephants have been born since 1984.

Colombo is the commercial capital and largest city of Sri Lanka. According to the Brookings Institution, Colombo metropolitan area has a population of 5.6 million and 752,993 in the city proper. It is the financial center of the island and a popular tourist destination. It is located on the west coast of the island and adjacent to Sri Jayawardenepura Kotte, the legislative capital of Sri Lanka. Colombo is often referred to as the capital since Sri Jayawardenepura Kotte is within the urban area of, and a satellite city of, Colombo. It is also the administrative capital of Western Province, Sri Lanka and the district capital of Colombo District. Colombo is a busy and vibrant place with a mixture of modern life and colonial buildings and ruins. It was the legislative capital of Sri Lanka until 1982.Due to its large harbor and its strategic position along the East-West sea trade routes, Colombo was known to ancient traders 2,000 years ago. It was made the capital of the island when Sri Lanka was ceded to the British Empire in 1815, and its status as capital was retained when the nation became independent in 1948. In 1978, when administrative functions were moved to Sri Jayawardenepura Kotte, Colombo was designated as the commercial capital of Sri Lanka.

Any cookies that may not be particularly necessary for the website to function and is used specifically to collect user personal data via analytics, ads, other embedded contents are termed as non-necessary cookies. It is mandatory to procure user consent prior to running these cookies on your website.